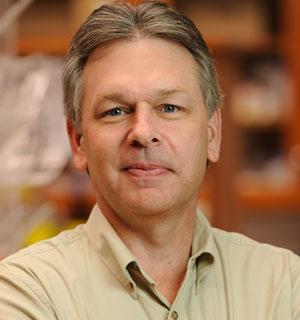 Dr. Hiebert received his Ph.D. from Northwestern University in molecular virology before pursuing postdoctoral studies at Duke University.  He initiated his independent research laboratory at St. Jude Children’s Research Hospital studying the E2F family of transcription factors and their regulation by the retinoblastoma tumor suppressor.  While at St. Jude, he started a research program in acute leukemia studying the t(8;21), which is one of the most frequent chromosomal translocations in acute myeloid leukemia.  He also studied the inv(16) in AML and the t(12;21) in childhood B cell acute leukemia.  In 1997 Dr. Hiebert moved to Vanderbilt University School of Medicine and in 2000 he was tapped to lead the Vanderbilt-Ingram Cancer Center’s Program in Signal Transduction and Cell Proliferation.  In 2008, Dr. Hiebert was named an Ingram Professor of Cancer Research and became the Associate Director for Basic Research in the cancer center.  In 2010 he also assumed the duties of Associate Director for Shared Resources.  In 2013 he was named the Hortense B. Ingram Professor of Cancer Research.  He has been continuously funded by the ACS and the NIH since 1992, leads a National Cancer Institute funded training program for graduate students and postdoctoral fellows that is in its 28th year, and is the principal investigator for Vanderbilt’s American Cancer Society Institutional Research grant that is in its 52nd year.  He has served as a reviewer for the NCI, Leukemia and Lymphoma Society, and the American Cancer Society, and served on the American Cancer Society’s Council for Extramural Grants.  His research interests include hematopoietic stem cell functions, epigenetics, and the mechanism of action of epigenetic drugs, and he has authored over 140 manuscripts.