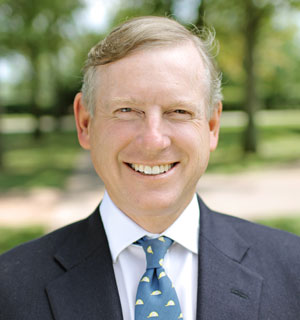 William S. Farish, Jr. was born in Houston, TX in 1964. He graduated with a B.A. from the University of Virginia in 1987. From 1987 to 1990 he worked in the financial industry in Houston before serving as the personal aide to President George H. W. Bush. Afterwards, Mr. Farish joined the management of his family’s Lane’s End Farm, where he leads all aspects of one of the largest thoroughbred breeding operations in the United States.

Mr. Farish is a highly active promoter of thoroughbred racing and serves on a number of related foundations. He has been Chairman of the Board of the Breeder’s Cup for over five years (2006-2011; 2013-2017). In addition to his numerous equine interests, Mr. Farish devotes much of his time to philanthropy, serving as a Board Member or Trustee for institutions devoted to educational or health care related missions such as the University of Kentucky, Markey Cancer Center Foundation, and the Edward P. Evans Foundation.